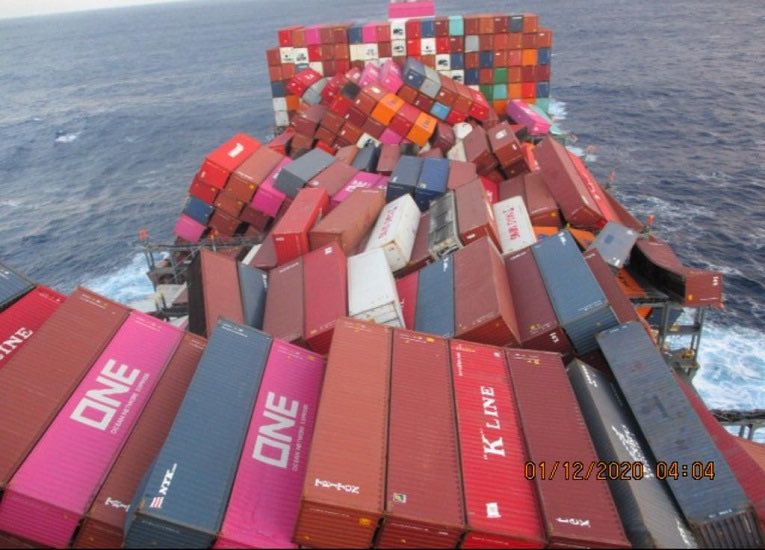 The Friday Five: ONE Apus spills 1,900 Containers into Pacific

On Tuesday, container carrier ONE released a situation report saying 1,900 boxes or more could have been lost on Monday night when its vessel ONE Apus, with a 14,000 TEU capacity, hit heavy weather in the Pacific. Of those 1,900 boxes lost overboard, 40 are believed to be DG [dangerous goods] containers.

The vessel was on passage from Yantian to Long Beach, approximately 1,600NM north-west of Hawaii, when it encountered a violent storm cell, producing gale-force winds and large swells, which caused the magenta-colored ONE Apus to roll heavily, resulting in the dislodging of the lost containers.

The US Coast Guard issued a warning to Hawaii mariners as a precautionary measure to ensure vigilance when far out to sea.

The vessel has since rerouted to the Japanese port of Kobe with plans to right unstable containers, assess any damages and determine the exact numbers of containers lost.

It could be the largest single container loss since the sinking of the MOL Comfort in 2013, which resulted in a loss of 4,293 containers.

The total insurance bill from the ONE Apus box spill is estimated to top over $50 million.

On Wednesday, XPO Logistics announced plans to spin off its warehousing and logistics operations as a stand-alone business with its own board and management team in the second half of next year. CEO Brad Jacobs said the move is intended to release "substantial equity value" and attract more investors.

The split would shift course from the growth strategy the Greenwich, Conn.-based company undertook between 2011 and 2015 when it used a rapid series of acquisitions to build an operation that vaulted it into the top ranks of logistics providers and provided $16.65 billion in revenue last year.

XPO is the second-largest North American warehousing provider on a square-foot basis, according to Armstrong & Associates. That segment logged $1.58 billion in quarterly revenue, up 4.6% from the third quarter in 2019.

Week over week, new records are continuing to be set on the Asia – Europe trade lanes. Today, marks yet another milestone.

Year-on-year spot rates from Asia to North Europe are up 196.8% and up 209.2% to the Mediterranean. Similarly, intra-Asia year-on-year rates around Southeast Asia are up by a sensational 390.5%!

While these are headline-grabbing numbers, it is essential to remember that 65% to 75% of all cargoes are moved on a contract basis, not via the spot market.  As the industry readies itself for another contract negotiation season (typically, January through March), the container lines will be riding high off the backs of these record spot rates. The real impact will most likely be felt in 2021, translating into higher contract rates as space continues to be at a premium.

On Thursday, IBM's cybersecurity unit spotted a sophisticated global email phishing campaign targeting the COVID-19 vaccine cold storage supply chain. "Whoever put together this campaign was intimately aware of whatever products were involved in the supply chain to deliver a vaccine for a global pandemic," said IBM analyst Claire Zaboeva.

The fraudulent emails impersonated a Chinese business executive at a credible cold-chain supply company dating back to September.

IBM’s analysts said the phishing campaign has the “potential hallmarks of nation-state tradecraft,” though it wasn’t clear which countries could be behind the emails. It also wasn’t clear whether the attacks were successful.

US shippers’ acute need for truck capacity is driving consolidation activity in the dedicated contract carriage market. When truck capacity is at its tightest in perhaps decades, Shippers are turning to dedicated service providers to secure freight space.

The Black Horse acquisition will add about 2,000 vehicles, 4,000 employees, and more than 90 terminals across the US to Penske’s portfolio. This acquisition will also bring customers in the food and grocery, retail, bakery, dairy, consumer packaged goods, manufacturing, and automotive industries.

According to the Federal Motor Carrier Safety Administration data, Penske Logistics already has more than 3,600 tractors and 5,000 drivers.